The Museum of the Order of St John

We think of them as kindly helpers at village fetes patching up minor injuries and teaching people how to resuscitate shop window dummies, but once upon a time they were warrior monks in charge of a whole country.

Strange as it may sound, I’m going to classify the tour as the main bit, because the museum itself is so small and seems to be intended as an addendum to the tour.

Be careful you tag on to the right tour, however. There are so many round here that we tried gatecrashed the wrong group twice before getting in with the right one.

Tours begin at 11am and 2.30pm and last about an hour and twenty minutes, taking in the whole of the inside and out of the arch, that ancient (well, Tudor) building you might have wondered about if you’re one of the many local office workers rushing by.

The St John's Maltese cross, old and new: although it has become simpler in design, the four arms still signify the four virtues of prudence, justice, temperance and fortitude, and the eight points stand for the eight ‘attitudes.’

The Chapter Hall inside was also designed to look like a Tudor Hall, with lots of stone, exposed beams and ‘cordalls’ supporting the roof representing the different languages common in the Order at the time (every time the word ‘Order’ is said you definitely hear it with a capital initial and a slight echo).

St John’s flags and Maltese crosses are everywhere. Both have changed over the years: the St John in question was originally St John the Almsgiver, until he was usurped by John the Baptist after the Order was given his right hand. Well, supposedly his right hand – there are about 8 of them in existence; perhaps he’s like Kali.

We are told the stories of many of the former pryors, whose shields are displayed along the walls in date order with a few spaces left at the end for the next Grand Pryors. It’s very similar, probably intentionally, to the display of Popes at St Paul’s just outside Rome; that one says that the Church will fall when they run out of space for Pope plaques, but the Order of St John has fallen and risen enough times that I doubt it’s worried about a little interior design.

The original priory was smashed up by revolting peasants, not because they hated the Order but because the Pryor at the time was also the treasurer charged with collecting the poll tax, then Henry VII shut it down, Mary opened it and Elizabeth shut it down again. Even the puritans had a go at it, perhaps because the Order’s pryors occasionally had a side-job as the wonderfully named Master of the Revels. Playwrights such as Shakespeare would have paid frequent visits to the Council Chamber directly above the arch. 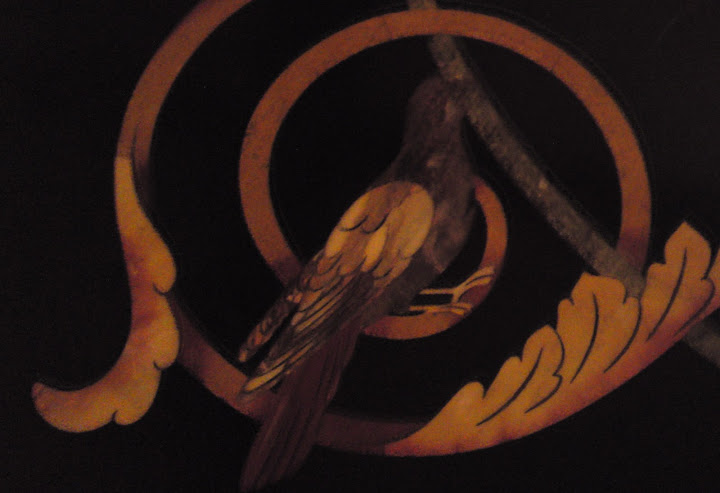 Their Maltese rent was 'one falcon a year.' This is what they thought was a falcon. Good thing they were human healers, not animal.

This Chamber has romped through history like Forrest Gump. As well as the above, it hosted Samuel Johnson and Oliver Goldsmith when it was the HQ of the first ever Gentleman’s Magazine. Artist William Hogarth also lived here as a child, when his father ran an unsuccessful Latin-themed coffee shop in the building, and if that sounds unlikely, when the Order reclaimed it, the building was a pub.

The Mantle Room, now full of fairly random but pretty stuff donated by the people of Malta, has also changed role, but for a sad reason – it was the Coins and Medals room until the majority of them were nicked in the 1980s.

The museum itself has only been open for a few years, and is small but well organised, laying everything out from the original Knights in armour to current First Aiders in uniform.

While this building was going through so many changes, so was the Order. Although, as the Knights Hospitaler, they took a vow to care for the sick – and treated people of all nationalities – they got sucked in to the Crusades along with everyone else. After they got booted out of Jerusalem, they did a tour of future tourist traps Acra, Limasol and Rhodes, before Holy Roman Emperor Charles V gave them Malta.

Suleiman failed to kick them out of Malta – the Knights sent his warriors heads back to him as cannonballs – but Napoleon succeeded. After this, there are some gaps on that wall of plaques where there was no grand pryor at all. 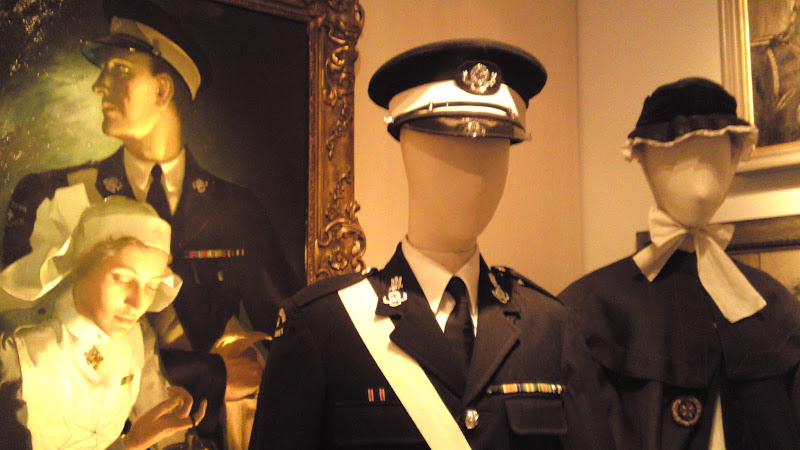 The woman in the painting is about to leap out and possess one of the dummies. Run! Run for your life!

Returning to their Hospitaler roots was what gave the Order back the building, by then worn out from its colourful life. They got it because they’d set up an eye hospital in Jerusalem (it’s still there and very busy) and started to train people in first aid.

I wonder if, secretly, the really high-up members of the Order are trained as warrior monks too? Bandages, thermometer, safety pins, helmet, sword…

Across the road from the arch is the modern church, counterintuitively much more minimalist than the Methodist chapel down the road that we’d visited earlier the same day. Here stood the round priory that the peasants destroyed; a ring of slate on the ground outside still marks the size and shape of the building. 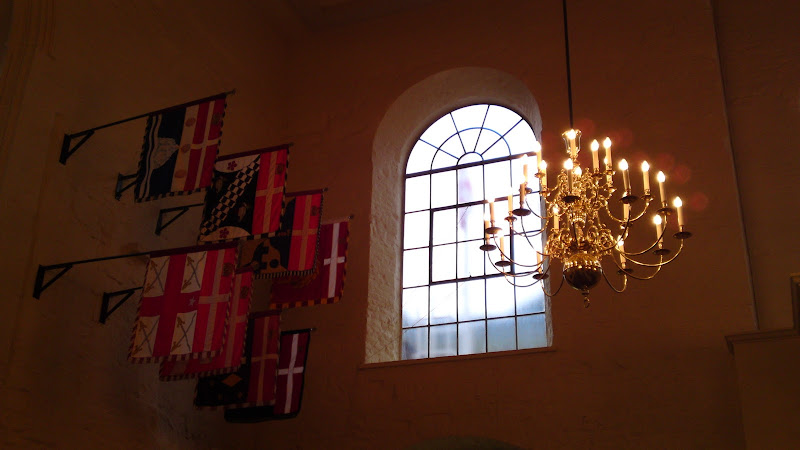 Underneath, the 12th century crypt is still intact and, woah, this makes the whole visit worthwhile even if the lively history of the rest doesn’t interest you.

To one side is a chapel in which you can actually get married, at least if you’re a Goth or a Twi-Hard. On the other side is the alabaster effigy of one of the procurators of the Knights of Castile. He’s not an original resident of the crypt, having been brought over here after he was made homeless (he’s ‘The Interloper from Sunny Spain’) but he’s not random: as well as the page and the puppy curled up by his feet, he bears a Maltese cross. Remember that scene in Indiana Jones where they crawl through the rats to lift the lid off the tomb? This is like a cleaner version of that, perhaps thanks to the Knights of Castile.

After the beauty of this effigy, it’s genuinely shocking to turn the corner and see the ghastly cadaver effigy of William Weston. As a memento mori, they made a model that looked exactly like his corpse after several months underground, and they made his facial expression look like he could feel every nibble from the worms. Oh yeah. That’s exactly what I want at my wedding.

The bits where you end up spending money. 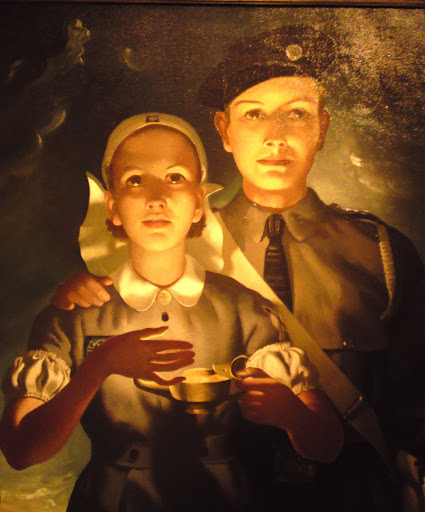 A postcard of two of the scariest first-aid kids ever.

The shop is very small and, to be honest, rather expensive, but the donations chest looks like it was previously used by pirates. I bought one of those wooden pencil cases and pencil sets; it cost more than usual but my daughter reckons it’s better than usual too.

Stuff for kids and people who act like them.

If you plan your visit well, there will be lots on for kids, as they do have special family events on occasion; otherwise, there is a dressing up area and of course lots of armour, and any young St John’s badger would gain from seeing their organisation’s interesting history. 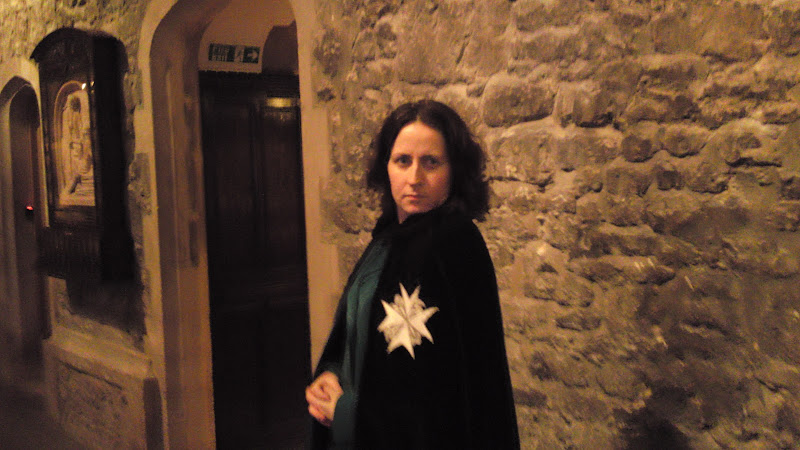 This is actually inside - they kept the exterior Tudor wall as part of the inside of the museum.

I’m now looking up first aid courses, since mine is years out of date and my daughter has no knowledge of it at all; this isn’t the explicit aim of the museum, but I’m sure the Order would be pleased.

I've challenged myself to visit 100 museums in a year, from the massive to the miniscule, in London and other places.
View all posts by 100museumsinayear →
This entry was posted in Uncategorized. Bookmark the permalink.