Here you get to preach from Wesley’s pulpit, sit in his reading chair and admire his massive organ. Oh, and learn a little about one of the biggest Christian denominations, if you like. 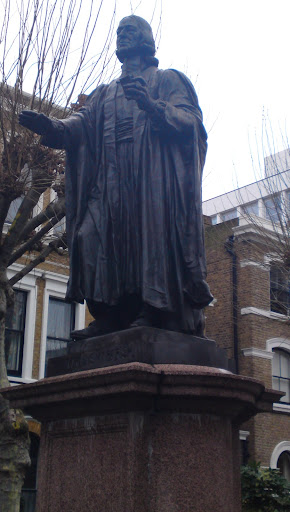 This isn’t the first time I’ve been here; when I came before it was because I was lost and needed the loo, but I ended up staying for the entertainment provided by an eccentric ex-military volunteer.

Said volunteer wasn’t here today, and we missed going round the actual house because we could find the volunteer who had the keys. It’s a shame, because the friend who was with me would have loved it. The house is set up like it would have been had John Wesley still been living there, but, unusually, you can touch and use most of the items. I expect devout Methodists would get a real kick out of sitting in John Wesley’s reading chair; for me it was more of an inspiration for interior design because man, was that chair comfortable! We even made a model of it at pottery the next day. Sadly, I can’t provide a picture, because the dog’s eaten it.

Either preaching or sneezing; 'bless you' is appopriate either way.

The museum section makes great use of paintings from the time periods it’s talking about, such as Hogarth’s gin alleys demonstrating the debauchery and Godlessness that was apparently rife at the time Methodism started in the 18th century. The rest of the museum, naturally enough, focuses on the life and works of John Wesley and the other early Methodists.

'We also expect that 'A FEMALE!!!' will address the congregation.

John Wesley and his brother Charles were bright young men who came from a tradition of religious non-conformism, and they both entered religious orders, but both also had a crisis of faith after going on a mission to Georgia. ‘I went to America to convert the Indians. But oh! Who shall convert me?’ asked John. Nature-loving Apaches weren’t the cause, however, but some particularly devout Moldovans. Back in London, more Moldovans continued to make the Wesleys feel impious. I had no idea there were so many of them in the city, or that they were so saintly.

A friend of John advised him to ‘preach faith until you have it, then you will preach because you have it,’ and this seems to have worked. John and Charles had it so much that they didn’t even want to stay within the church, and preached to heathen miners and factory workers in the fields. This is part of the reason that so many of the significant Methodist sites are in the West country and Wales, which is one of the reasons Methodism became so popular in America. 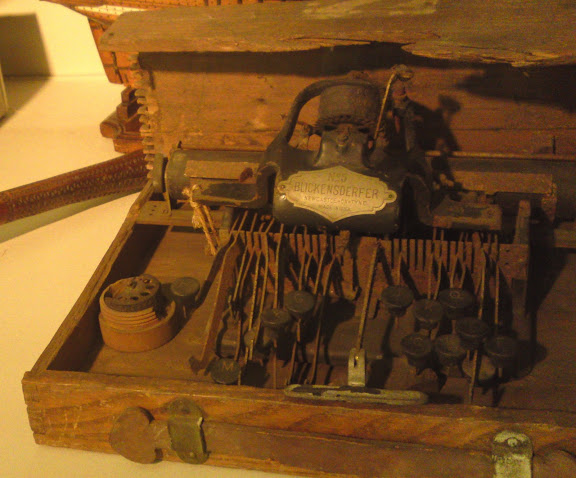 The waterlogged skeleton of a typewriter that belonged to a Methodist parson who was shot to death by pirates.

Church leaders very much did not like this easy-going preaching. They also did not like the Wesleys’ ‘enthusiasm.’ Most churches in England today would be grateful for any kind of enthusiasm among its followers, but back then it meant ‘excessive or extravagant display of religious emotion’ and was much frowned upon by the grumpy puritan Anglicans.

They also wouldn’t have approved of all the singing. I’ve never been to a Methodist service, but I suspect it’s more fun than the few Anglican and Catholic services I’ve been to.

Although you wouldn’t usually count the church as an ‘extra,’ it is for me, since it’s not a museum.

A detail from a window; unusually direct.

My impression is that Methodist churches are usually plain, homely places, and this is confirmed by the Welsh friend who was visiting with me, but Wesley’s chapel is really rather glamorous. Even on a somewhat overcast Winter’s day the stained glass windows were vibrant in their technicolour glory. Each pew had a different design at the end, no doubt all signifying something, the pillars were marbles, and the massive organ is on the mezzanine level along with a second lot of tiered seating.

There is a secondary chapel that’s a lot simpler, like a village chapel, and here John Wesley’s own less impressive organ is still in use. Stop sniggering at the back.

Reflect upon your sins and the fact that you should focus on yourself before judging others, and eat your lunch on a bench.

it is open between services on Sundays.

There are open green spaces at both the front and back of the house. Although the chapel is opposite the pleasant open spaces of Bunhill fields, these gardens would be a lovely place to spend a quiet lunchtime. Even the traffic noises are quieter at the back, where a modern mirrored office building surrounds the church like a guard.

The bits where you end up spending money.

As well as a small shop in the basement, there are postcards and books for sale upstairs, for which you pay by depositing money in a slot in the wall. This is quite trusting, but I guess not many people would risk going to Hell for the sake of a 30p postcard.

Stuff for kids and people who act like them.

This pew in the museum looks like it was lifted off a flying chapel - there so should be one.

The museum really isn’t aimed at children, though young Methodists might be interested in the origins of their faith. On church days, there’s a crèche and a Sunday school and there are occasional kids’ activities and older children would probably enjoy going behind the scenes in the house.

More photos. The ones with names were taken by Evan Matthews.

I've challenged myself to visit 100 museums in a year, from the massive to the miniscule, in London and other places.
View all posts by 100museumsinayear →
This entry was posted in Uncategorized and tagged chapel, church, city road, east, ec2, london, methodists, parson, religion, sheep, wesley, wsleyan. Bookmark the permalink.